Friendly in the Field

I moved to the town I live in now about 8 years ago.  I didn't know anyone and found it relatively difficult to meet people who shared any of my interests.  September rolled around and it was my first early season goose hunting with this area as my home base so everything was new; finding new general areas that held geese, new roosts, new landowners, etc.  I was working about 35 miles from home so every evening I would take a different backroad home with the hope I would find some geese along the way.

One night on the way home, through the windshield, I could see three small flocks crossing left to right over the gravel road in front of me about a mile ahead.  I took my first right with the hopes of getting in front of them.  Trying to keep the birds in sight and staying on the road (which I wasn't familiar with) was a challenge and it didn't last long.  High water that fall had roads closed off and I had to backtrack at least two miles to get back to another path to follow them.

There's nothing like flocks of geese to attract attention and I met another truck turning down the road I had just dead-ended on...undoubtedly hoping to do what I had just been hoping to do.  My first thought was, "Ha, you're screwed"...as I peeled out of the intersection and went the other way to continue my chase.  A few miles down the road, with me parked on the side of the road and already on the phone with the landowner, the truck I had just passed pulled up to me.  "I suppose you're hunting here tomorrow?" he asked.  Feeling victorious I said, "Yeah, we'll see what the weather does."

It was at this point that I did something I don't think happens often enough in the hunting world; I asked if he wanted to hunt with me the next day.  We exchanged names and phone numbers (coincidentally his name is Phil also), and although we never did hunt that field, the guy in the truck has become one of my better friends and we've shared many goose/duck hunts and fishing holes in those 7+ years.

Photo: Me and Phil from a few years ago 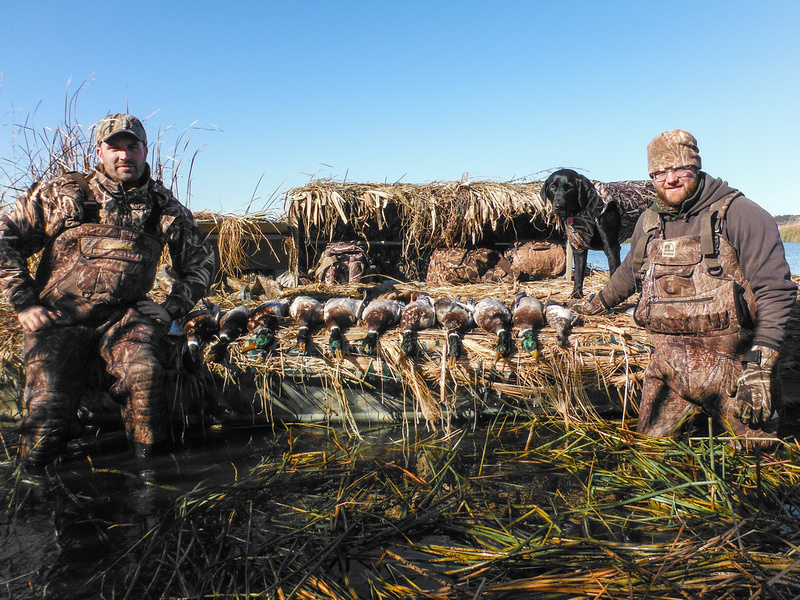 This story came to mind because I shot a turkey yesterday.  It was a great story but one that I'll save for another post because it's long (7 days worth of hunting on a large public land piece).  One of these non-gobbling turkeys came in late yesterday afternoon, just about as I was to head home.  I was in the middle of some thick brush and cedars when I shot him.  I spent a little extra time tagging and examining him as he was one of the more rewarding hunts I have had.  When I came out of that thick cover I must've sounded like Bigfoot.  Once back in the oaks and could open my eyes again I saw another hunter standing about 50 yards away...no doubt he had heard my shots only 15 minutes prior.

My first thought was that this was going to be interesting to see how this plays out.  The first words between us though were, "I hope I didn't screw up your hunt".  I was surprised he was apologizing for being in the area.  Relieved, I said with a smile, "No worries man, it's all good" as I pointed to the tail fan sticking out of my turkey vest.

I walked down the draw to him and we proceeded to discuss the turkeys in this area, hunter pressure, where we lived, etc, for the next 30 minutes.  Turns out he was new to the area and didn't sound as if he had many people to hunt with around here.  I offered if he didn't shoot a turkey that night, to go out with him the next day.  We exchanged phone numbers and names there in the bottom of South Dakota river bottom and, even though we didn't hunt today, we are meeting at 5:30am tomorrow morning to hopefully track one more of those sneaky gobblers down.

Photo: Me with my turkey from yesterday :) 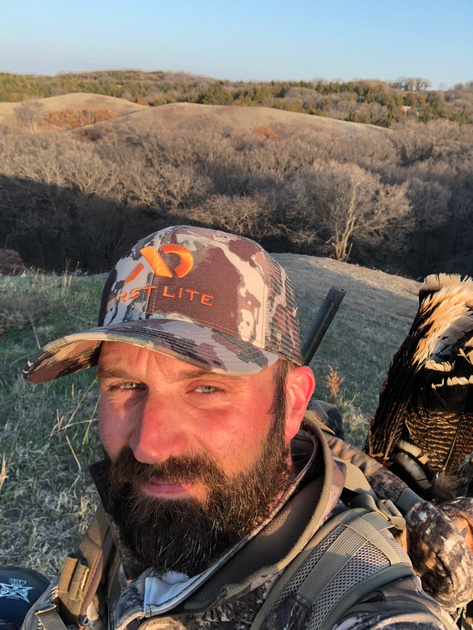 Glen Herrig(non-registered)
Having moved around a bit myself, I can completely relate to your experience of finding new places to hunt. I feel I became a better duck hunter once I was out of the comfort zone and familiar surroundings I was used to hunting. Your experiences of meeting the two guys is a good lesson for everyone - we're all out doing something we love, courtesy and respect can open many doors. Nice post.
Mark Kendall(non-registered)
Always great to hear these stories. I met one of my now best hunting buddies at 4:30 in the morning making a mad dash to a walk in area. Flight day had hunter pressure through the roof. We said we would rather work together than against each other and combined our resources. I’ve now killed lots of ducks over the years with that guy and have learned a lot from him.
Todd Norsten(non-registered)
Hey Phil,
I was unsuccessful in my attempt to subscribe to your blog, so I tried to in Safari. This was also unsuccessful. Any hints?
No comments posted.
Loading...
Subscribe
RSS
Recent Posts
Camera Equipment 101 Pass Shooting's Perfect Storm Friendly in the Field The Facemask Conundrum Try This, Seriously! Eventually It Pays Off The Gear I Use and Why Right in the Thick of It Hail Call
Keywords
photography duck waterfowl duck hunting ducks geese goose snow south dakota hunting
Archive
January February March April May June July August September October November December
© Phil Kahnke
Powered by ZENFOLIO User Agreement
Cancel
Continue