Right in the Thick of It

The pursuit of fowl, for most who chase them at all, unless you are one of the deranged snow goose hunters, tends to be non-existent in the spring months.  In my case it is almost as strong as in the fall.  The bulk of my waterfowl photography comes during the months of March and April with the large bulk being solely in March unless we get lucky and have a cool spring.  This year happens to be one of those times and we are in the middle of a deep freeze that feels and looks more like February.

Having had up to this point only a couple short bursts of warmth, most of the marshes and lakes from my home range and north are still frozen over.  Many of the bigger ones still sporting vehicles and ice fishermen.  The melting snow from our last storms has made for abundant habitat for waterfowl on their way back north despite everything else being frozen over.  Basically anything that was water before fall is still ice and anything that collects meltwater is a collecting pool of just about any type of duck you can think of at this point, at least until two days ago.

Very little open water can resist 5 degrees above zero.  My morning from today was spent reaffirming that theory.  The spot on my cell phone where my weather app sits is probably more worn down than any other part of my screen and with the forecasts that we have had lately, even more so.  When I saw single digits predicted I was quite excited because that means one thing in particular to a waterfowler or a waterfowl photographer that is sitting right at the cusp of the migration...concentrated masses.

The roads were still nasty this morning but I don't have to drive far this time of year to have mega amounts of birds to choose from.  The first two spots on the list; both due to proximity to home but also to closeness of vehicle access to the south side of the marsh, were both frozen with only a few birds sitting on the ice where a thousand or more had been the day before.  Most marshes had small spots of open water that were packed full of birds essentially swimming in circles.  My next spot to check out wasn't far and at half a mile away I could already see a pretty steady stream of ducks coming and going...now the wait to see how much water was open, and in turn, how much work I was going to have to do.

Pulling through the field approach on the side of the 50 acres or so of water I wasn't too thrilled to see only several open areas of water, none of them being along a southerly shore (this being important due to the south winds and sun at my back).  So the work began; put on waders, warm hat and gloves, get out camera equipment, unload canoe and decoys.  At this point the canoe was merely a substitute for a sled to carry decoys and other gear.  A few inches of snow proves much easier to drag a sled over than dry phalaris grass. 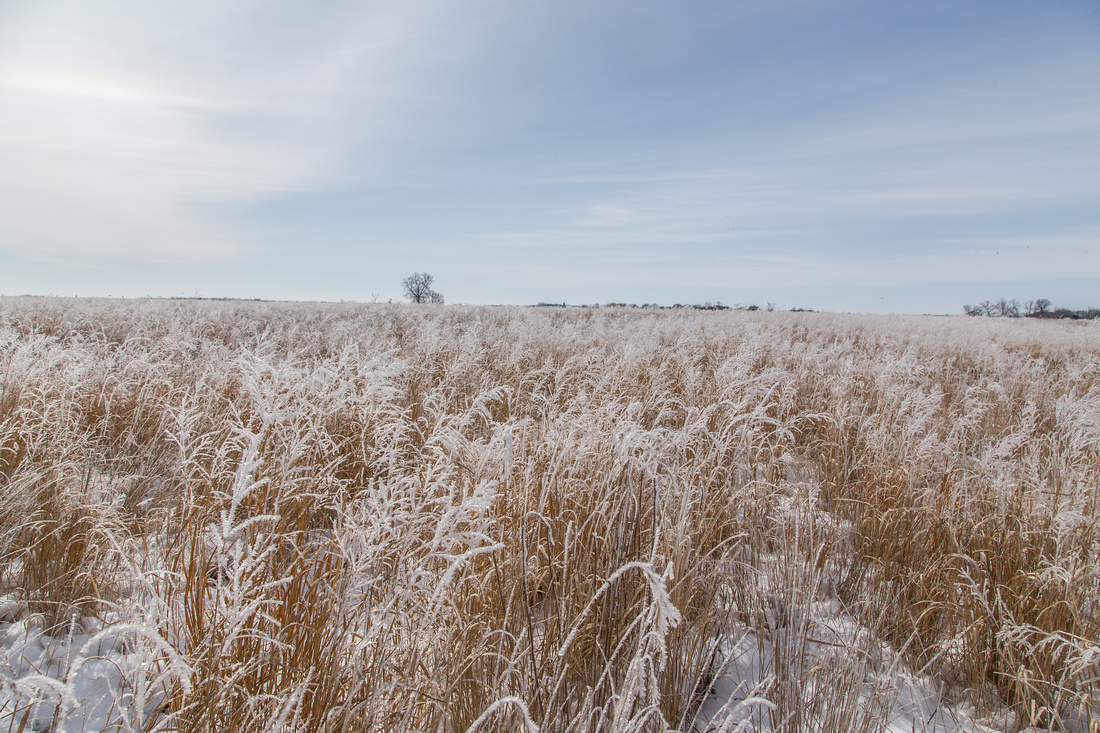 I was surprised by how easily I was able to haul my gear the 500  yards to a cattail point.  When I got there, the ice wasn't quite enough to stand on and I broke through on my second step out from shore.  Keeping the canoe next to me for stability and ice breaking assistance, I proceeded to "cut" a hole approximately 50'X50' on my downwind side (to the north).  For those unfamiliar with this process it is fairly straightforward.  You break an outline in the ice about the size of the overall hole you want, being careful not to crack or break the large piece that you are cutting "out".  Once you have the cut completed you push the sheet of ice under the surrounding ice, leaving you with a nice big hole of water surrounded by ice.   I filled it with 40 duck decoys and found a spot to put my low profile stool in the cattails.

There's days that are amazing for photographing ducks and days that are miserable; this one fell somewhere in between.  It was very cold, windy, and a fair amount of work to get an open hole in the ice.  I had almost non-stop flyovers and fly-bys of bluebills with most not coming quite low enough to be anything other than a blue sky shot so I didn't take many of those.  I was lucky enough to be treated to a lot of interactions with buffleheads, the trickiest of the ducks to get an in-flight photo of.

Bufflehead SnippetForgive the shakiness, I was in an awkard position to track them moving around so quickly.

By mid-afternoon the lighting situation had diminished to a point where the photos weren't what I was hoping for so I started packing up.  As I got out of my stool in the cattails I noticed that there was a lot less snow right around me, to the point that I probably looked silly sitting in a white cover up.  My eyes gazed to the grassy hillside that I had come down in the morning with my canoe behind me.  It was covered in snow at that time.  That snow was gone now.  Anyone who has ever pulled anything will know that snow is a much better sliding surface than grass.  So plan B went into action and I I ended up walking back along the shore, breaking an inch of ice the entire way back to the closest spot to my truck.  Those walks are much easier with a camera full of good photos, luckily this was one of those days. 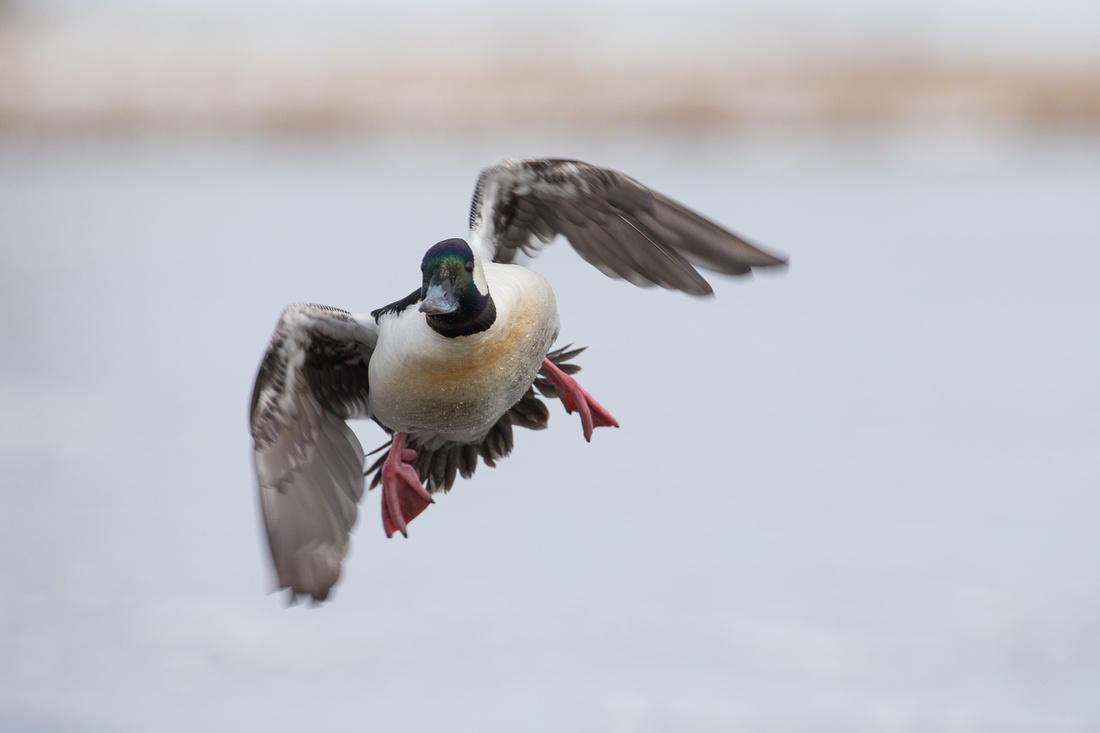